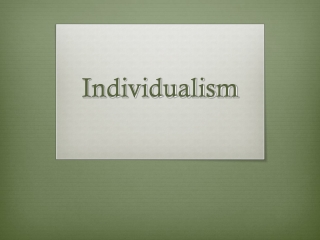 Background - The one; the many… individualism and collectivism: cross-cultural perspectives on self-ingroup

Americans - . vocabulary. american identity. the defining criteria and shared heritage by which people define and

Gothic Horror - . the dark side of individualism. the possibility of evil. many writers of the 1800’s were unable to

The shift from Authoritarianism to Individualism in the American colonies. - Remember the organizing principal: between