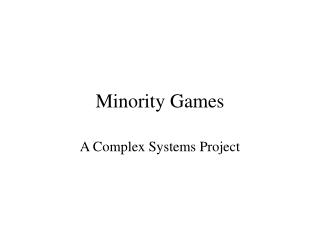 Minority Games. A Complex Systems Project. Going to a concert…. But which night to pick? Friday or Saturday? You want to go on the night with the least people. So you try and guess which night. You can base your guess on previous attendence. But so does everyone else. Majority and Minority games - . let g be a graph with all degrees odd. each vertex is initially randomly assigned a

Coordination, Intermittency and Trends in Generalized Minority Games - . a.tedeschi, a. de martino, i. giardina (to be