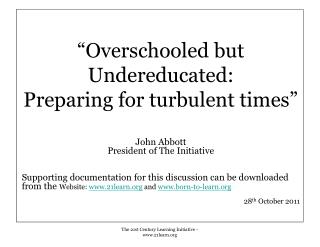 “Overschooled but Undereducated: Preparing for turbulent times” John Abbott President of The Initiative Supporting documentation for this discussion can be downloaded from the Website: www.21learn.org and www.born-to-learn.org 28 th October 2011.

Fluvial Processes “the great sculptor of the landscape” - . i. the river channel a. basic mechanics 1. laminar flow

In Times of Crisis : Supporting Others, Supporting Ourselves - . john gaspari, lcsw executive director usc center for

It Was the Best of Times and the Worst of Times: - Laura ewing texas council on economic education

Getting Ready for RDA: Preparing for the Transition - . rick j. block columbia