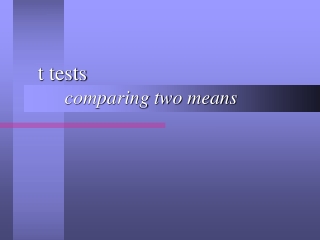 t tests comparing two means. Overall Purpose. A t-test is used to compare two average scores. Sample data are used to answer a question about population means. The population means and standard deviations are not known. The Three Types. There are three ways to use a T Tests: Comparison of Means - . most t tests involve the comparison of two populations with respect to the means of

t -Tests: Measuring the Differences Between Group Means - . t-test. comparing group means what is the probability of

Comparing Two Means - . introduction in the previous section, we developed methods for comparing two proportions. what