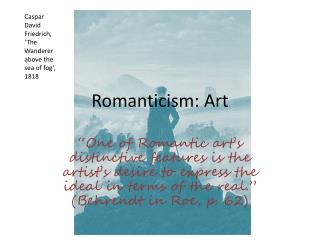 Caspar David Friedrich, ‘The Wanderer above the sea of fog’, 1818. Romanticism: Art. “One of Romantic art’s distinctive features is the artist’s desire to express the ideal in terms of the real.” (Behrendt in Roe, p. 62). Romanticism and Art - . how romanticism was expressed in art. romantic thoughts included ideals of society,

Romanticism, Realism, &amp; Impressionism in Art - . romanticism. characterized by the 5 “i”s imagination was

ROMANTICISM - . the term romanticism derives from the french word romance which referred to the vernacular

ROMANTICISM? - . can you tell me what it’s all about?. define the term!. “twelve months of suffering”….

ROMANTICISM - . the beginning of a new age a radical change in european culture about the concept of human beings, world

romanticism - . literary movement in england began in 1798 with the publication of the poetry collection lyrical ballads

Romanticism - . reflections in painting. themes. fascination with the past grotesque nature supernatural nationalism.