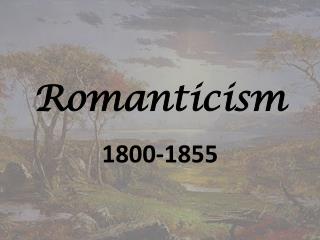 Romanticism. 1800-1855. Romanticism. The term derives from “romance,” which from the Medieval Period (1200-1500) and on simply meant a story (e.g. all the chivalric, King Arthur legends) that was adventuristic and improbable . How it begins…. ROMANTICISM - . the term romanticism derives from the french word romance which referred to the vernacular

ROMANTICISM? - . can you tell me what it’s all about?. define the term!. “twelve months of suffering”….

ROMANTICISM - . the beginning of a new age a radical change in european culture about the concept of human beings, world

romanticism - . literary movement in england began in 1798 with the publication of the poetry collection lyrical ballads

Romanticism - . reflections in painting. themes. fascination with the past grotesque nature supernatural nationalism.

Romanticism - . romanticism: a movement in the 18 th and 19 th centuries that was a reaction to logic and reasoning of

Romanticism - . a movement in art and literature 1800-1860. characterized by 5 points. nature emotion individual

Romanticism - . romanticism. at the end of the eighteenth century, the intellectual movement known as romanticism emerged