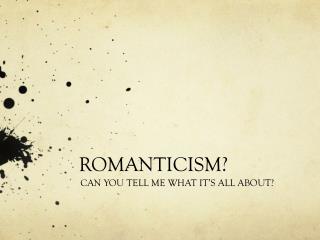 ROMANTICISM?. CAN YOU TELL ME WHAT IT’S ALL ABOUT?. Define the Term!. “Twelve Months of Suffering”…. Romanticism “ Is just that which cannot be defined .” - 1824 scholars, Depuis and Cononet.