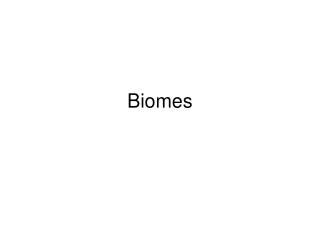 Biomes. Introduction. A group of land ecosystems with similar climates and organisms is called a biome. It is mostly climate conditions in an area that determine its biome. We are going to talk about 7 land biomes and 3 aquatic biomes. Climatograph. graph

Chapter 3 Communities, Biomes, and Ecosystems - . 3.1 community ecology. a biological community is a group of interacting

Cultures Around The World - . students. teachers. for teachers. greetings teachers!. this activity is specifically

Biomes of the World