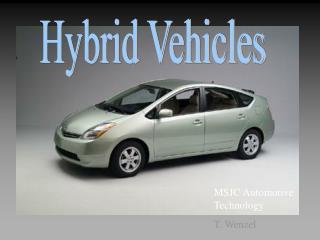 Consumers’ Willingness to Pay for Innovative Technology: Hybrid Vehicles - . evolution of the vehicle. late 19 th and

Design and Optimization of an ESU for hybrid light vehicles with the use of Supercapacitors - . students : aniello

Hybrid Vehicles - . presentation brought to you by: william bulloss sean watling. description of technology. use two or

Hybrid cars - . what is a hybrid car?. a hybrid car is a vehicle that basically has two engines or two sources of power.

Alternative Fuel For Vehicles *Hybrid Vehicles* - . by g.rakesh kumar. introduction. hybrid cars have been around for

Hybrid Cars - . drew tepper. what is a hybrid?. hybrid electric vehicles (hevs) include both a combustion engine as well

The Present and Future of Hybrid and Electric Vehicles - . presentation outline. why does society need/want hybrid and