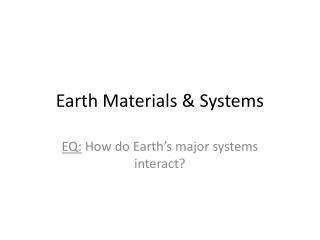 Earth Materials & Systems. EQ: How do Earth’s major systems interact?. How and Why. The surface of the earth is complex and dynamic made up of interconnected systems Interconnected means: connected together These systems are: Geosphere Atmosphere Hydrosphere Biosphere