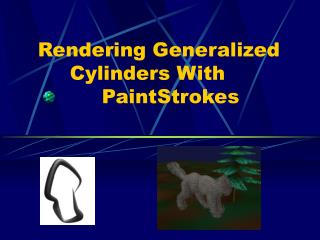 Rendering Generalized Cylinders With PaintStrokes. A generalized cylinder is the surface produced by extruding a circle along a path through space, allowing the circle's radius to vary along the path.

Generalized Matching Continued - . schneider (1973) and todorov (1973). version of the gml that describes the effect of