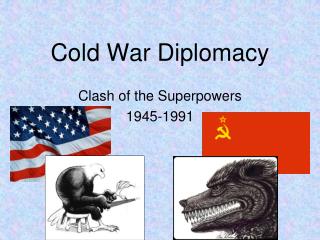 Cold War Diplomacy. Clash of the Superpowers 1945-1991. Causes of the Cold War. Ideological : Despite the WW II alliance, U.S. and Soviet ideologies presumed the eventual collapse of the other system

The Crisis of Diplomacy - . crisis at the top, challenge from below. traditional diplomacy. “diplomacy” has

“Science and Diplomacy: Negotiating the ITER International Agreement” - . presentation to the aaas – twas course on

Gunboat Diplomacy in the Barbary Wars - . by james a eichner ii. organization. gunboat diplomacy – definitions and

33-5 The Cold War Thaws - . the cold war begins to thaw as the superpowers enter an era of uneasy diplomacy. soviet

Indian Diplomacy and the European Invasion - . impact of european disease indian diplomacy an example of diplomacy.