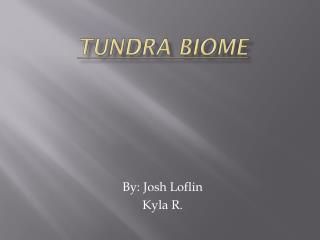 Tundra Biome. By: Josh Loflin Kyla R. Location of Tundra. Also called the “ice desert” “frozen prairie” The tundra biome is the coldest of all terrestrial ecosystems and also the most chaotic. The two types of Tundras are Artic and Alpine. Pictures of the Tundra Biome. Latitude of Tundra.

Tundra - . tundra location and climate. the tundra is found across northern alaska, canada, and siberia. it is the

Tundra - . by:bader-al-alshamlan. intoduction. tundra is one of the coldest of all biomes. it is also big, the tundra

Tundra - By: eric, wade, mabel. tundra. the tundra is very cold and the spring and summer are only three months combined

Tundra - . by: itcel rodriguez. tundra. a tundra can be found anywhere of the part of the northern

Tundra - ( spring). tundra. cathryn payne. climate. the temperatures in the tundra are extremely low. only a few weeks at

Tundra - . by: jarrid landis ryan faryna and michael marakovits. climate. the tundra is the coldest region in the world.

The Brains on Birds - . tundra biome. cold biome that averages –10 degrees celsius, 14 degrees fahrenheit, where the

TUNDRA Ecosystems - . description. tundra is the coldest of all the biomes. the soil in the tundra is permanently frozen.

The Tundra - . by: jameson maca and gavin peterson. climate . . ground is permitly frozen all year round . . the average

Desert Biome - . what is a biome?. a biome is a geographic area characterized by specific kinds of plants and animals.

The Tundra Biome - . by travis andring. the tundra. the tundra is split into two different types: arctic and alpine the