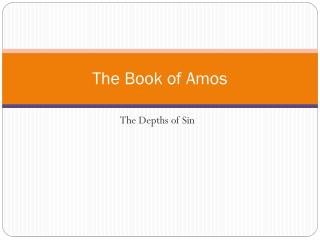 The Book of Amos. The Depths of Sin. Background to Amos. Amos comes from the village of Tekoa , south of Jerusalem Small mountain village Not a business center, more a shepherding community Amos is a commoner Not a priest, nor a member of the “School of Prophets,” “Amos In A Mess” A sermon series on the book of Amos - . today’s message the source and voice of authority

THE BOOK OF AMOS Part Two The Lord is His Name - . “seek me and live; but do not seek bethel, … bethel shall come to

THE BOOK OF AMOS Part One A Plumb Line in Israel

The Almost Famous Amos - . by jeri amos (music by john mellencamp “small town”). we are family. born in antioch,