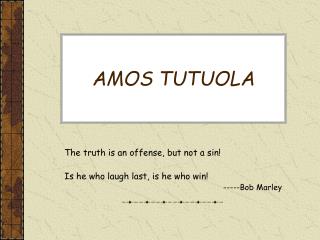 AMOS TUTUOLA. The truth is an offense, but not a sin! Is he who laugh last, is he who win! -----Bob Marley. Biography.

1. Review - What are the themes in biology that come up again and again - Predict - suppose you discover a new organism.