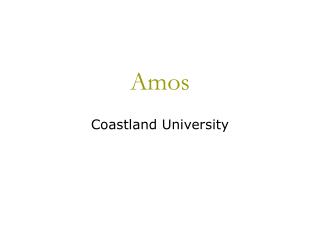 Amos. Coastland University. Key Verse. Amo 3:7 Surely the Lord GOD does nothing Unless He reveals His secret counsel To His servants the prophets. . The Writing Prophets of the Divided Kingdom Stage. Who Was Amos?. Amos means “burden” or “borne” Layman, shepherd, and ‘tended’ to fig trees

Amos 4:12 - . &quot;therefore thus will i do to you, o israel; because i will do this to you, prepare to meet your

Amos- a minor Prophet - . words of amos. “the words of amos, who was among the sheepbreeders of tekoa , which he saw