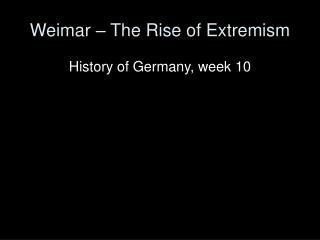 Weimar – The Rise of Extremism

Weimar – The Rise of Extremism

In The Name of Allah The Most Merciful, The Bestower of Mercy - Tackling extremism: a muslim perspective taalib alexander

The Rise of Darwinism - . and its implications for society. monarch creation ministry. august 2006. evolutionist richard