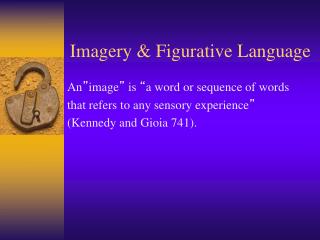 Imagery & Figurative Language. An ” image ” is “ a word or sequence of words that refers to any sensory experience ” (Kennedy and Gioia 741). Imagery. What are your five senses? Sight, Hearing, Touch, Taste, and Smell Intro to Visualizing and Verbalizing - . summer 2012. do now. what do good readers do?. mindset. objectives.

Water Vapour Imagery and Potential Vorticity - . questions. how can you visualize the wind? how can you see the upper air