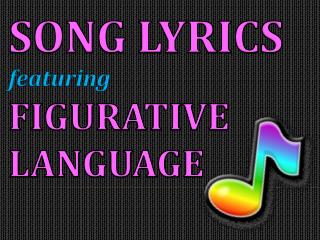 SONG LYRICS featuring FIGURATIVE LANGUAGE. “This time, This place Misused, Mistakes Too long, Too late”. alliteration. “Far Away” by Nickelback. “She’s like a song played again and again”. Simile. “Replay” by Sean Kingston. Learning Figurative Language with Song Lyrics - . whenever you describe something by comparing it with something else,

Pop Quiz! Theme and figurative language through song lyrics - . instructions:. for each song played, you must identify

Song Lyrics - . nugget in a biscuit. why does this song/poem appeal to you? . it appeals to me because it is about food

Shakespeare Song Lyrics - Merely a smalltown wench. existing within a lonesome parish. i possess the struts similar to

Bodo Song Lyrics - Get all lyrics of bodo latest, old and folk song of famous bodo singers on

Figurative Language - . k. sloggett glencoe public schools 2010. onomatopoeia. it is the naming of a thing or action by a

Figurative Language - . day 1. simile. a comparison of two unlike things using the words like or as. examples: his feet

Figurative Language - . what is figurative language? . it is writing that uses the “non-literal” meaning of words or