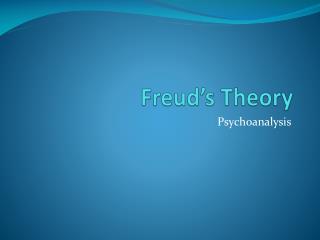 Freud’s Theory. Psychoanalysis. The Theory of the Unconscious. Freedom of the will is, if not completely an illusion, certainly more tightly circumscribed than is commonly believed .

Sigmund Freud: Founder of Psychoanalysis Theory Student Edition - . based on a presentation by: valerie norka &amp;

Theories of Personality - . sigmund freud-psychoanalytic theory. three processes at work. the id - a reservoir of

Sigmund Freud’s Theory of the Unconscious - . yann martel, life of pi. who was freud?. austrian psychologist based his

Psychodynamic Theories - . key terms. psychodynamic theory – an approach to therapy that focuses on resolving a

Neo-Freudian - . ap ch 10 personality. neo-freudian. people who broke with freud, but whose theories retain a

Freud’s theory of personality - . this topic. apply the tripartite model to personality learn about psychosexual

Freud’s Theory - . unconscious. the most important determinant of behavior psychic determinism mental processes that we