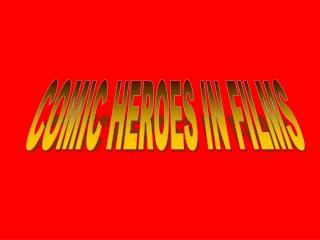 COMIC HEROES IN FILMS. BATMAN. Batman first appeared in number 27 of Detective Comics in May 1939. Batman was created by Bob Kane and Bill Finger. Batman is nowadays one of the most valued heroes in the world. TV SERIES (1995). BATMAN FILMS. BATMAN (1989). BATMAN RETURNS (1992). Lines in Comic Art - . show different movement by randy farley. what makes a line?. all lines have a beginning, middle,

1st clue : He is the hero of comics - . 2nd clue : a french famous characters. 3rd clue : he lived about fifty years