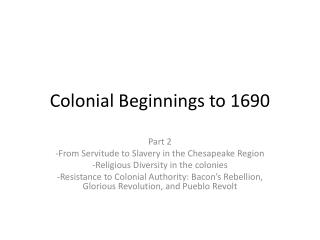 Ch. 5, Sec. 4 The Beginnings of Slavery in the Americas - . the origins of american slavery. slavery- the practice of

Transatlantic Encounters and Colonial Beginnings - . 1450-1690. questions. how did the people in mesoamerica and the

Colonial Resistance and Rebellion - . goal: describe the enlightenment and the rise of democratic ideas in the us.

Colonial Literature - The puritan era (1600 to 1700). colonial literature. when you think of the word “puritan” or

Early Exploration 1492-1600 - . reasons for exploration. prince henry the navigator. son of king john i of portugal

America Becomes a Colonial Power - . essential question : why did america join the imperialist club at the end of the