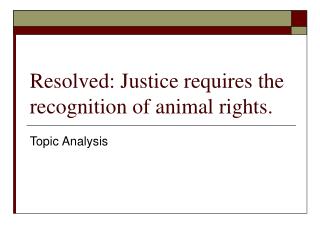 Resolved: Justice requires the recognition of animal rights. . Topic Analysis. What is Justice?. What are some ideas relating to justice? Fairness Reasonable cause Equality Social contract Law - judicial system Punishment - Eye for an eye Deterrence/prevention. What are animals?. The Reproductive System Chapter 17 - . introduction. the reproductive system seeks to ensure the survival of the species.

Giampiero Griffo Disabled Peoples International - DPI - T he uncrpd implementation in europe: a tool and a challenge for

Neural Networks - . pattern recognition. humans are very good at recognition. it is easy for us to identify the dalmatian