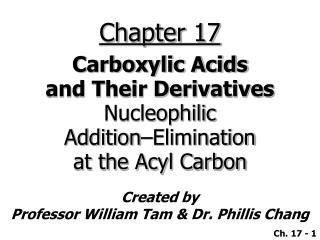 Chapter 17. Carboxylic Acids and Their Derivatives Nucleophilic Addition–Elimination at the Acyl Carbon. About The Authors. These PowerPoint Lecture Slides were created and prepared by Professor William Tam and his wife, Dr. Phillis Chang.