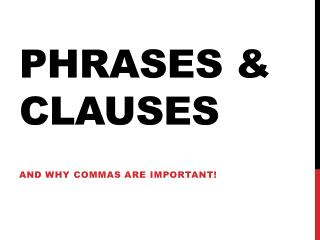 Phrases & Clauses. And why commas are important!. Word classes. Every word in the English language belongs to a “class”. It will be one of the following: a noun a verb an adjective a n adverb a pronoun a conjunction

The Wonderful World of Phrases and Clauses - . “grammar is a piano i play by ear. all i know about grammar is its

Unit 6 CONJUCTION - . it is a joiner, a word that connects (conjoins) parts of a sentence (words, phrases, and clauses).

Phrases, Clauses, and the Comma - . billings middle school la from purdue university writing center. what is a comma?.

AP Week 7 - . terms and vocabulary. 4. anaphora. the regular repetition of the same words or phrases at the beginning of

Phrases and Clauses Summary - . ms. lópez march 7th, 2012. phrases. is a prepositional phrase that modifies a noun or

Phrases and Clauses - . the building blocks of sentences. phrase a group of words that does not have both a subject and a