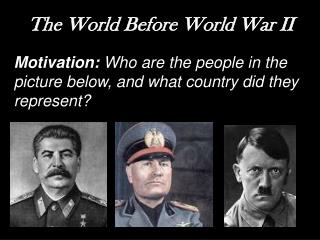 The World Before World War II The World Before World War II. Motivation: Who are the people in the picture below, and what country did they represent?. Aim : Prior to the start of World War II, what were the political, social, and economic conditions that existed in the Soviet Union, Italy, and in Germany?. Joseph Stalin.

The World Before World War II