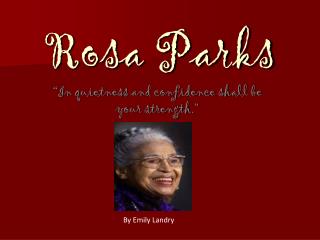 Unit Seven Review Game Whoo Hooo !!! - . which concept was made “the law of the land” by the plessy v. ferguson

Unit 5 Theme parks - . 1 .have you ever been to parks? if you have, why do you go there?. amuse ourselves, escape our

All About Rosa Parks - . by: aniketh grade 3 mrs. mcgarry’s class. all about rosa parks

If Rosa Parks Could Text: Content Area Writing in the Literacy Block - These are the slides i created for my session at

My story about Rosa parks

Rosa Parks - . rosa parks was born on february 4,1913 into a world of segregation and racism. at the time her family

ROSA PARKS - . by tinsleyn.thompon. how rosa parks helped people . she got on a bus and set in the front were the white

Rosa Parks! - . what is she famous for?. one day rosa parks was tired so she sat in the front seat of the bus. then a