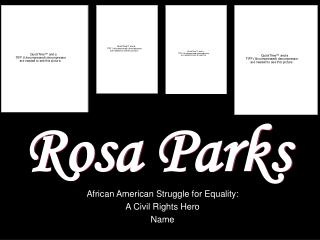 Rosa Parks. African American Struggle for Equality: A Civil Rights Hero Name. Rosa Parks is often referred to as the “Mother of the Modern day Civil Rights Movement” Her story helps explain how important every individual citizen is in a democracy. Rosa Parks - . was an african-american civil rights activist called the mother of the freedom movement she got on the bus

Rosa Parks - . 1001. rosa parks was a quiet black seamstress who sparked the montgomery bus boycott by refusing to give

Civil Rights Leader Rosa Parks - . this is her story. rosa parks. she was born 4 th february 1913, in tuskegee, alabama .

Rosa Parks and the Montgomery Bus Boycott - . march 2, 1955. claudette colvin 15-year-old was arrested, roughed up and

Historical Perspectives By: Justin Barrett - Hi i’m rosa parks and i am married to raymond parks. i lived from

Rosa Parks - . by rotimi onafowokan. introduction . we all know rosa parks as one of the women who fought for freedom and

Rosa Parks - . matthew. c hild. she was a good student. born. she was born in alabama . lead. she lead people in her

Notes 3.1B: The Beginning of the Modern Civil Rights Movement - . i. early actions. rosa parks 1. rosa parks , a

Rosa Parks - . born: february 4, 1913. montgomery, alabama. from the front steps of alabama's judicial building you can