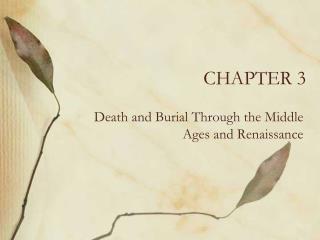 CHAPTER 3. Death and Burial Through the Middle Ages and Renaissance. Christian Influence During the Early Middle Ages. Timeline- 400AD-1400AD. Funeral Schemes 668-690 AD. Carry dead to the church for Requiem Mass Anoint them with holy water Celebrate the masses