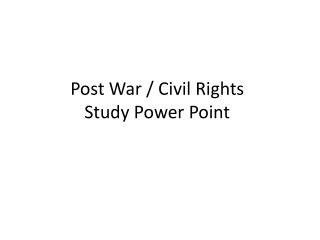 Post War / Civil Rights Study Power Point. The victory helped lead to the re-election of President Lincoln in 1864. What was most significant about Union Gen. Sherman’s capture of Atlanta ?. When was the first bow and arrow used?. Woodland.

The Civil Rights Movement in Pictures: - . itâ€™s black and white. but itâ€™s not pretty: the grit, grime and