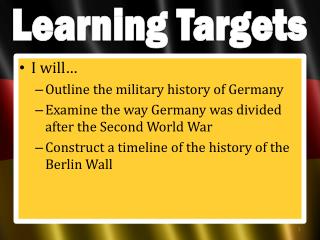 Learning Targets. I will… Outline the military history of Germany Examine the way Germany was divided after the Second World War Construct a timeline of the history of the Berlin Wall. Germany’s Geography:. The Downside. Being at the center of Europe….

Honors US History - . cause &amp; effect…. rise of military dictators during 30’s, us depression dictators grew

„Alemannia Judaica“ - Details about the history and internet presentation of an important research group.

Bell Ringer - What was the change during the russian revolution?. explain why germany was angry after wwi. the treaty of