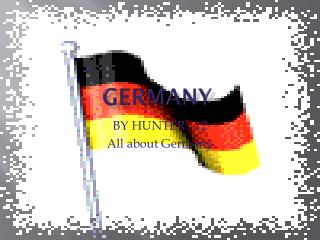 GERMANY. BY HUNTER 12 All about Germany. WHERE IS GERMANY. Germany is in Europe Germany is in the northwestern hemisphere . Germany is on the Eurasian tectonic plate. Germany is 357 021 sq km. Fact monster.com. Longitude and latitude.

Germany and the Alpine Countries - . germany. austria. switzerland. similarities. germany. is roughly the size of montana

Germany - . steven rode. germany. the three colors of the flag stand for the history back round of germany and its

Treaty of Versailles - . germany must take the blame for wwi germany must pay the allies $300 billion in reparations

PAPER I TOPICS - In depth. paper i topics. development of a dictatorship: germany, 1918-45. the establishment of the

Countdown to WWI - . the unification of germany. franco-prussian wars of 1870-1871 germany establishes itself as a main

Germany’s Culture - . g ermany’s culture is a vast rich experience. in my project i’ll touch on some aspects of