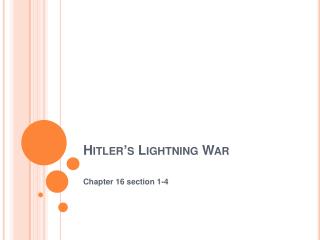 Systems Thinking - Lightning talk given at

Blackhawks win Stanley Cup - The chicago blackhawks win their third stanley cup in six years, with a 2-0 victory over the

Hitler and Nazi Germany - . adolf hitler. hitler was born in braunau am inn, austria, the son of a minor customs official

Thunderstorms - . thunderstorms: some key facts. produced by cumulonimbus clouds and are accompanied by lightning and

Adolf Hitler - . “i shall go down in history as the greatest german” – adolf hitler. weimar republic. born out of

Beginning of World War II Ch. 32 - . “nature is cruel, so we may be cruel, too… i have the right to remove millions

Chapter 26 - . section 1 - the road to war. dictators. they control by force and fear not the u.s. hitler and mussolini.

Fascism and National Socialism and the Beginnings of World War II Theme: How Hitler gave rebirth to Germany - . lesson

The Rise of Totalitarianism: Mussolini and Fascism Stalin and Communism Hitler and Nazism - . franklin delano roosevelt: