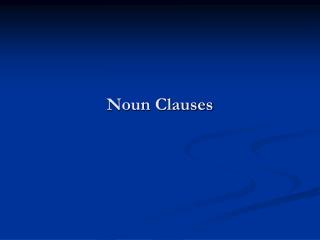 Noun Clauses. A NOUN CLAUSE is a group of words with a subject and a verb. WHO WHOM WHEN WHICH HOW WHERE IF WHY THAT WHAT WHETHER WHOEVER WHEREVER WHICHEVER HOWEVER WHOMEVER WHATEVER WHENEVER .

Clauses - . a clause is a group of words that contains a subject (noun) and a predicate (verb). phrase vs. clause.

Adjective Clauses - . what are they? when do you use them?. what’s an adjective clause?. what’s a clause? a group

Clauses - . identifying adjective, adverb, and noun clauses in a sentence. phrase vs. clause. a clause is a group of

NTUT Academic Writing (III) - . “noun clauses”. a noun clause is a dependent clause and is used as the object of an

Phrases &amp; Clauses - . and why commas are important!. word classes. every word in the english language belongs to

Phrases and Clauses What do we already know? - . phrases . clauses . group of related words can act as a single part of

Subordinate Clauses - . what the heck are those?. subordinate clauses. clause has a subject (noun) and a verb (what the

ADJECTIVE/ RELATIVE CLAUSES - . we use adjective clauses ( also called relative clauses ) to identify or give additional

CLAUSES - . grammar, yay !. main clauses. clause – group of words that has a subject and a predicate and that is used

Clauses - . what to consider when deciding if a subordinate clause is an adjective, adverb, or noun:. step 1: if you