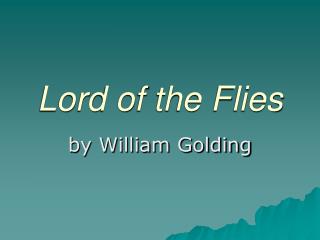 Lord of the Flies. by William Golding. Background. The story takes place during WWII, probably on an island somewhere in the Atlantic. Several boys between the ages of 6 and 12 have been evacuated from their war-torn boarding school. Chapter 1: The Sound of the Shell.

宝贵十架 - . 主耶稣我感谢你 thank you lord you died for me 你的身体为我而舍 with love you gave your

The Kite Runner by Khaled Hosseini There is a Way To Be Good Again - . english ii: world literature. what are some of the

Lord of the Flies by William Golding - . an introduction. william golding and lotf …what did you find out?. william