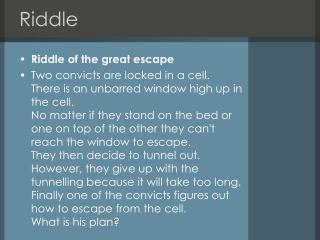 Riddle. Riddle of the great escape Riddle - . i am a monster that has been on a diet. there is no fat on me! or muscle either! you might say that i am all

RIDDLE - . what goes around the world but stays in a corner?. typography. font styles evoke different moods. select a

Riddle - A man and his son are driving in a car one day, when they get into a fatal accident. the man is killed

RIDDLE - . you see me quite often, but don’t really care. if you pass by me, you’ll often stop and stare. i can’t

Riddle Poems - . read the riddle and try to guess what the object is! hint: they are all things you can play! . poems are

Riddle Test - . by brennan. riddles. this year i am very interested in riddles and i was wondering how good you were at

A Riddle - . a father and son are both seriously injured in a car accident. when the paramedics arrive they take the

A Riddle… - . what do you get when you combine 2 bikes, two foam sticks and 2 idiots?. a collision!. conservation of

Riddle exercise - . in a one-story pink house, there was a pink person, a pink cat, a pink fish, a pink computer, a pink

A Riddle… - . i am light and i am heavy. i am strong enough to hold up a skyscraper. i am fragile enough to be blown

Riddle Poems - . read the riddle and try to guess what the object is! hint: you can find the answers in your classroom!.