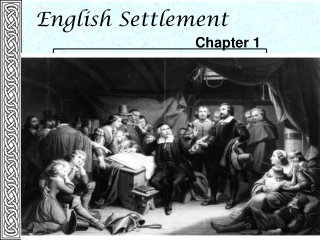 English Settlement. Chapter 1. Background to English Colonization. Population transfer No centralized Empire Experience in Ireland Gave them model for planting settlements, transplanting their familiar way of life and subjugate the Indians as they had the Irish.

An English Settlement at Jamestown - The early struggles of the first colony, john rolfe and john smith, and “brown

The Settlement of the Original 13 English Colonies - . americans: who are we and how did we get here?. great britain