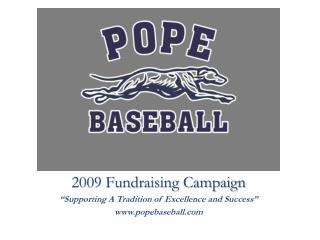 2009 Fundraising Campaign “Supporting A Tradition of Excellence and Success” popebaseball

2009 Fundraising Campaign “Supporting A Tradition of Excellence and Success” www.popebaseball.com.

2009 Fundraising Campaign “Supporting A Tradition of Excellence and Success” popebaseball

Best of MLB playoffs - Highlights from the hunt for baseball championship

A Brief History of the US - . once the religious, the hunted and weary chasing the promise of freedom and hope came to

Making - . the. case. making the case for jesus not muhammad. all are “christian” (in muslim eyes), but do all