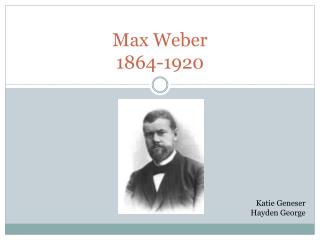 Max Weber 1864-1920 . Katie Geneser Hayden George . Background. Born 1864, Thuringia Father was wealthy civil servant who was highly involved in both politics and academics For Christmas one year he wrote two analytical essays to give to his parents as gifts Attended law school

Max Weber (1864-1920) - Studied the characteristics of modern life. saw the modern world in terms of rational