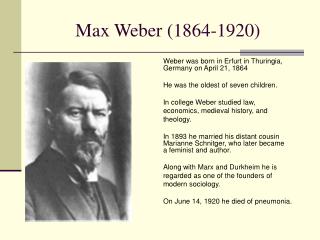 Max Weber (1864-1920). Weber was born in Erfurt in Thuringia, Germany on April 21, 1864 He was the oldest of seven children. In college Weber studied law, economics, medieval history, and theology. The Causes of Poverty and Underdevelopment - . disparities of wealth the richest 1% of people own nearly half of all of

1920’s and 1930’s Vocabulary - . prohibition. the national ban on the manufacture, sale, and transportation of