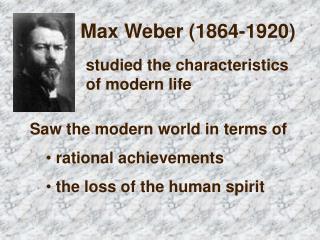 studied the characteristics of modern life. Saw the modern world in terms of rational achievements the loss of the human spirit. Max Weber (1864-1920). Rationalization – An increasing, long-range tendency in all areas of life. to replace the mystical, the subjective, and the sentimental