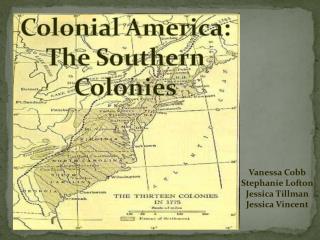 Colonial America: The Southern Colonies. Vanessa Cobb Stephanie Lofton Jessica Tillman Jessica Vincent. Essential Question. Suppose your family was setting off for the new world. What would your colonial life be like? How were the colonial people like me? . Let’s Discover Colonial Life: .

U.S.HISTORY - . eoct review. unit 1. 1. which of the following statements best explains the dramatic increase in african