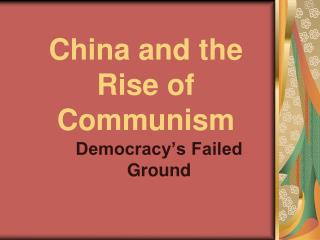 The Rise of Totalitarianism: Mussolini and Fascism Stalin and Communism Hitler and Nazism - . franklin delano roosevelt:

Capitalism vs. Communism - . unit 7 – ms. doyle. page 3: capitalism vs. communism. warm up make a t-chart in your notes

THE COLD WAR IN ASIA CHINA and KOREA - . essential question : what impact did the spread of communism into asia have on