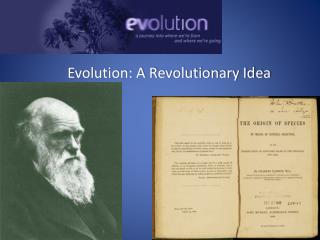 Evolution: A Revolutionary Idea. A. What is Evolution?. 1. Several definitions. video 1. video 2. a. descent with modification (Darwin). b. change in gene frequencies within a population. Darwin and the Evolution of Reasons - . daniel dennett biosphere february 14, 2009. philosophers who weren’t. #1

AIM - . what is evolution?. evolutionary theory. process of change in species over a long time they are distinctly

Evolution - By natural selection the idea of progress the spirit of the times in 19 th century, england especially.

Icons of Evolution - . origins – evolution or creation?. “ no educated person any longer questions the validity of