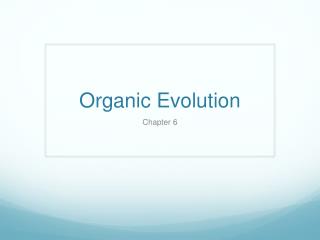 Organic Evolution. Chapter 6. Evolution - Defined. Evolution – a change in the genetic composition of a population over time. A change in the frequency of certain alleles. On a larger scale, evolution can be used to refer to the gradual appearance of all biological diversity.

Fossils and Evolution of Organic S pecies - . what are fossils?. any remains or evidence of prehistoric life found in the

Theories about the evolution of organic molecules - . year 11:biology. describe two scientific theories relating to the

Organic - Acids are defined as organic compounds with acidic properties. because these acids are organic, their

Organic - Earth source organics invites you to explore the taste delights of our righteously raw chocolate bars, which,

Evolution of Evolution - . what is evolution? what was going on this time period? who influenced the idea of evolution