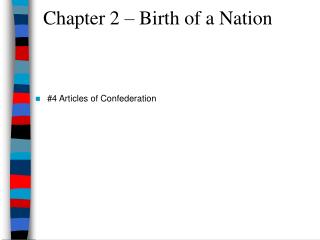 Chapter 2 – Birth of a Nation Chapter 2 – Birth of a Nation

The Birth of Shaka - . by mbuyiseni oswald mtshali. shaka zulu

Separated at Birth? - . no other foundation (yeshua’s fivefold ministry) by norman b. willis www.nazareneisrael.org.

Chapter 24 Section 1 The Nixon Administration - . essential questions:. what were nixon’s plans to lead the nation on a

Chapter 14 - . a nation divided. lesson 1: north and south grow apart. seek first to understand. there were many

Chapter 4 - . prenatal development and birth. “there was a star danced and under that i was born.” william