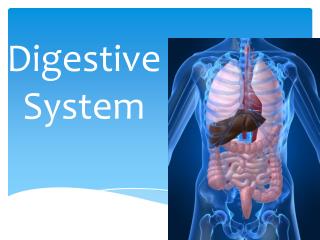 Digestive System. The digestive system is responsible for the physical and chemical breakdown of food so it can be taken into the bloodstream and used by body cells and tissues. The Digestive System includes:. The Alimentary Canal : Long muscular tube

The Nutritional Connection - . chapter 11. learning objectives:. become familiar with the anatomy and physiology of the