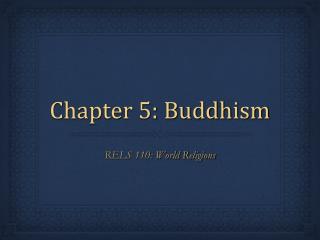 Chapter 5: Jainism - . rels 110: world religions. these two are anti- brahmanic : rites are of no effect. time line: the

Chapter 5 - The classical period: directions, diversities, and declines by 500 c.e. i) expansion and integration ii)

Buddhism - . and siddhartha gautama. facts and stats. buddhism stemmed from hinduism and was started by a real historical

Chapter 5 - . lesson 4 buddhism. who was the buddha?. according to buddihist tradition, the man who became the buddha was

Chapter 5 - . lists and loops. introduction. this chapter introduces: input boxes list boxes loops (do while, do until,