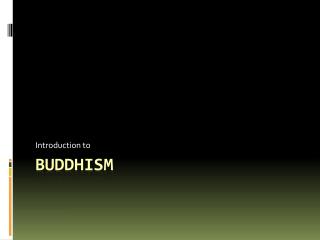 Nietzsche and Zen - . nietzsche on buddhism life-denying nihilism european buddhism i could be the buddha of europe…

BUDDHISM - . by: bella chaucer. 1.when and where did buddhism begin?. buddhism began in northern india around 2500 years

Introduction to Buddhism - . buddhism is similar to western religions in that …. ….it has a founder …it tells a

Buddhism - . by: samantha bullock, kimberlyn knutson, and andrew smith. i. founder . (siddhartha gautama) a. buddhism was

Buddhism - . religions of south asia. buddhism in the subcontinent. the essence of buddhism. the “middle way of wisdom