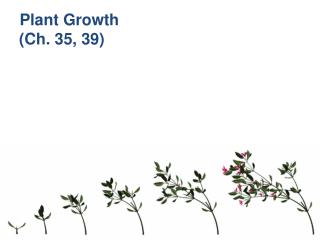 Plant Growth Requirements - . in order to grow well, plants must have basic needs met. these are: proper temperature

The Effect of Light Type on Plant Growth - . by katra. the environment around the world is constantly changing- due to

Plant - . you’ll leaf this knowing more!. form and function. a presentation of chapters 35 – 39 by clarence lewis,

Plant Growth and Development - . flowering plants are either monocots or dicots. cotyledons provide nutrition for the

Plant Growth &amp; Development - . introduction. there are 6 plant processes that effect growth which are….

Requirements for Plant Growth - . plants require certain environment for optimum growth in greenhouse one must maintain